Introduction to ” EXODOS” the Cretan collection – The Minotaur-

17 Set Introduction to ” EXODOS” the Cretan collection – The Minotaur-

Posted at 14:00h in Words by Bacco Artolini

The original Myth:
The Minotaur was born in Crete. Poseidon, gave Minos a magnificent white bull, ordering it to be sacrificed in his name. However, King Minos, found it so beautiful that couldn’t kill the animal. The god affronted, avenged the insult  with Persifae ( king’s wife), which under his influence, felt in love with the white animal and asked Daedalus (inventor at their service), to build a wooden cow, in order to hide inside and lie with the bull. This is how  was born the Minotaur.
So Minos, condemned the monster to live in the labirinth.
After locked up even Daedalus (the engineer) and his son Icarus.
The Minotaur in the mith, was killed by Theseus, with the help of Ariadne, half-sister of the monster.

Detail: Paleolitical venus possessed by icarus.. And the minotaur in the bottom of the labirinth

Creative lucubrations:
The figure of the Minotaur, which inspired greek god Pan, Roman fauns and the devil of Christianity, symbolizes the duality.
There is a secret in this horned symbol, ancient handed it down to be discovered, reviewed, accepted and forgotten once and for all ..
We have not yet succeeded .. Even we are building an artificial habitat for the Minotaur, protecting it and feeding it.

The cognitive method, we learn as children, divide: good / bad, right / left, black / white, true / false, positive / negative, etc. …
For a certain period of time is useful, allowing us to recognize the dangers, avoid them, organizing knowledge, store them etc .. is the scientific method.
Unfortunately, not all (maybe nothing) can be solved by this tool. The child ( and perhaps for humanity is  the time to grow) becomes attached and continues to use it, until the network of mental thoughts, becomes a labyrinth, where lives the monster, the devil in Dante’s inferno .
But back to the story ..
Theseus killed the Minotaur, and then run away from the labyrinth with the help of Ariadne. They slept together till the island of Naxos, where under the influence of Dionysus the god of wine,  she was abandoned pregnant
Theseus unlike Icarus (we will see in the Icarus post), flew away from the maze, but fell down with new wings .. The Minotaur was not dead .. 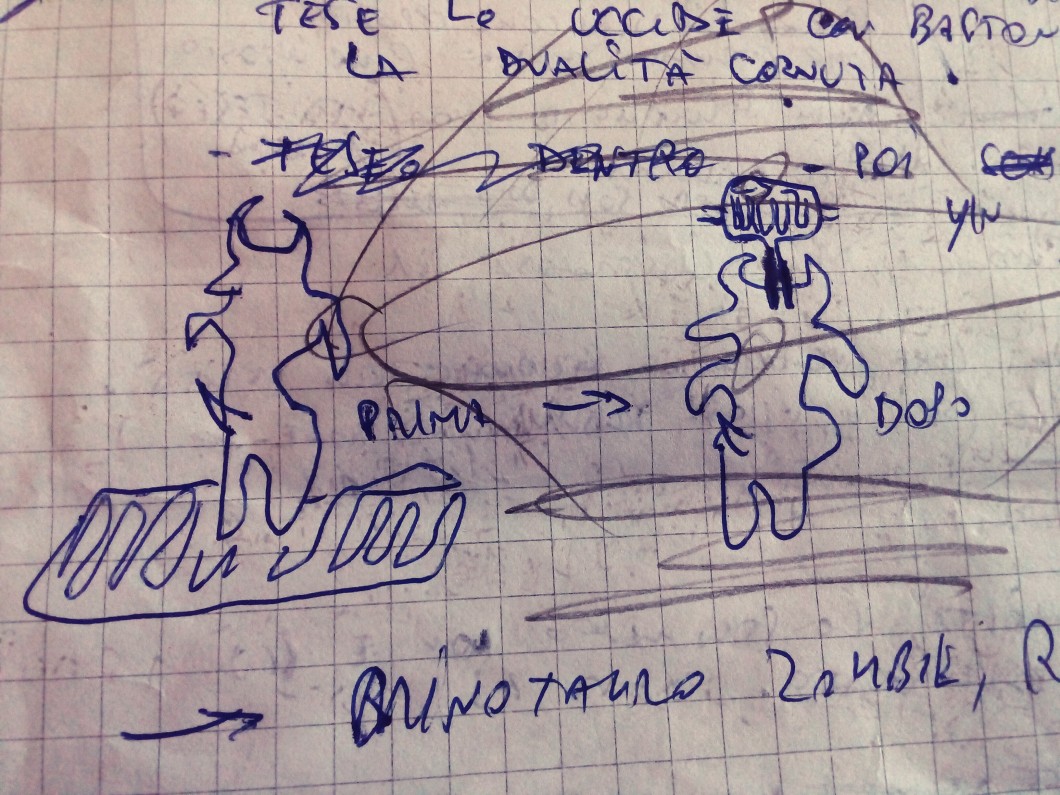 The duality was not abandoned. The labyrinth materializes now in a microchip, a memory card .. The technology becomes our maze. We exist because we appear on a monitor, in the artificial memory, in the frozen cloud.. To be ( digital) or not to be ( digital)?
The Minotaur, like a zombie, wear the labyrinth beneath the skin, and its movements are controlled .. Devours the seven days of the week, but is never satisfied .. is going to devour Afrodite, as well..